The other night I was reading to my daughter from her Little Princess Devotional when my daughter asked me a question:

What is hope and faith?

We had just seen recent blockbuster Cinderella.  Therefore, with fairy tales fresh on the mind, I explained hope and faith in the best way I thought an eight year old could understand.

Hope is to believe in a happy ending. 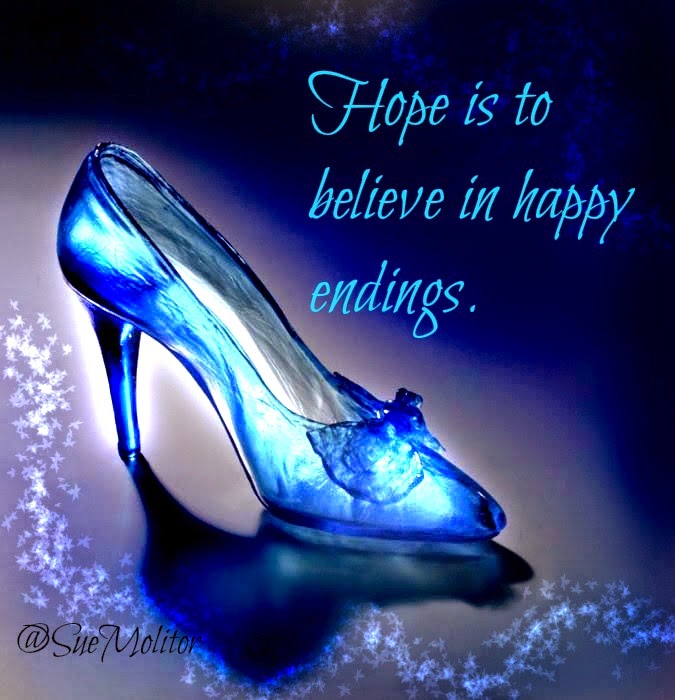 "Now faith is confidence in what we hope for and assurance about what we do not see." Hebrews 11:1 NIV

Biblical "hope" is having a confident expectation of a positive outcome.

Therefore, to have faith is to believe or have a confident expectation of a positive outcome when the evidence is not yet seen.

In the movie Cinderella, there is a point when Cinderella nearly loses her hope.  She almost can't believe in her happy ending.  But, we all know what happens, don't we?  Yes.  Her fairy God-mother shows up!

Sometimes in our lives, we may nearly lose all hope.  We may even feel like we can't go on and there is no use in trying.  It is at those times that we must not lose our hope.  We must continue to believe there is a happy ending.

Cinderella almost gave up.  If she had, it would have cost her a prince and a happiest of endings. Her prince came to her rescue and so will our Prince.

I love this picture of hope as believing in happy endings mostly because it is so simple and child-like.

The Lord says in His Word that we are to have faith as a child and come to Him as a child (Mark 10:15).  Believing is child-like faith.

I understand that life can be hard and your circumstances may look dismal.  In fact, perhaps you are at that place where you have almost lost all hope...hopelessness.  If that is you today, my hope and desire is to encourage you to have hope.  My aim is to encourage you that God has a good plan for you.

We play a part in writing our own stories.  Yes, we make choices daily.  We decide in what direction the plot will turn.  However, as long as our pens are in sync with the Author, we can rest assured He is guiding our story towards a happy ending.

This is the great mystery.  How do we write our own stories when there ultimately is a divine Author.  I may not be able to answer that question, but I do know the Author and I know He is good.

Sometimes our happy endings look different than how we would have written them, but He is a better writer than us  We need to trust the Author.

I trust the Author.

Posted by Sue Molitor at 8:14 AM No comments: 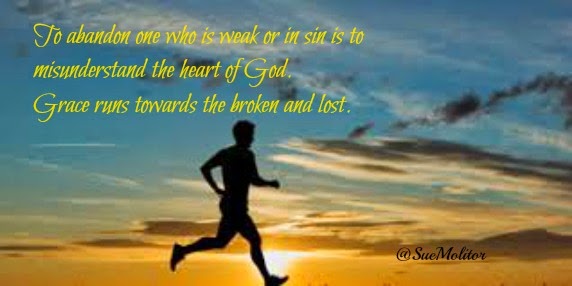 Posted by Sue Molitor at 8:38 AM No comments:

Last summer my family and I went to Typhoon Lagoon, a water park at the Walt Disney World Resort in Florida.  At this park, there is an attraction where you can literally swim with sharks. However, these sharks are "friendly", meaning they stay at the bottom on the diving tank and don't eat people.  I wouldn't want to swim with any other kind of sharks, only Disney sharks.

The other day, the Lord revealed to me that I have been swimming with sharks spiritually.  In contrast, these sharks are not like the ones at Disney.  They are not friendly, and to continue to swim with them will only lead to captivity and eventually death.

Swimming with the sharks is representative of living with a hidden sin.  In my case, this sin was unforgiveness.  I honestly didn't recognize the sin nor the danger until the Lord revealed to me I was swimming with sharks.

Sin is sneaky and often disguises itself as "friendly".  Sin will swim next to us pretending to be on our side, all the while leading us into a watery trap.

The serpent pretended to be Eve's friend. Serpents and sharks are never our friends. He appeared to be wise and on her side, all the while luring her to her death.  The enemy isn't interested in just getting us to taste sin.  He wants to destroy.

If you have been swimming with a shark, big or small, I want you to join me in getting up out of the water.  Perhaps you are comfortable with your shark and he feels safe.  He isn't.  He is a shark!

Read the verses below and see how serious it is to swim with sin.

"But he who hates his brother is in darkness and walks in darkness, and does not know where he is going, because the darkness has blinded his eyes." 1 John 2:11

"But if you do not forgive others their sins, your Father will not forgive your sins." Matthew 6:15

"See, Lord, how distressed I am! I am in torment within and in my heart I am disturbed, for I have been most rebellious.  Outside the sword bereaves; inside, there is only death." Lamenations 1:20

These verses are sobering.  Thankfully, we have an advocate, Jesus Christ, who helps us get up out of the shark infested waters.

"My little children, these things I write to you, so that you may not sin.  And if anyone sins, we have an Advocate with the Father, Jesus Christ the righteous.  And He Himself is the propitiation for our sins, and not for ours only but also for the whole world."  1John 2:1-2

Serpents and sharks are never our friends.

Father, I realize today that I have been swimming with sin.  Father, please forgive me for _________ and help me out of the water.  I don't want to continue in this sin.  I want to be free.  Help me Lord. In Jesus' Name, Amen.

Posted by Sue Molitor at 7:49 AM No comments: 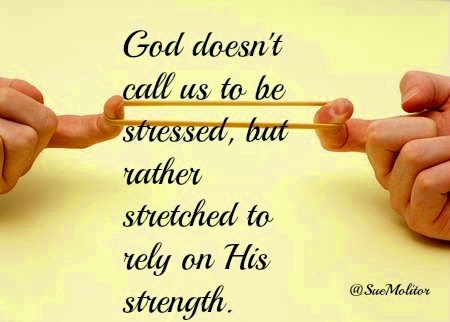 My friend and blogging cohort Becky Crenshaw introduced a new way to read through the book of Psalms in the month of March.  Click here to read more about it.

I am one of many following her lead in reading through Psalms.  Yesterday, one of the verses I read was the above verse, Psalm 62:5.

Lately, due to circumstances, I have felt a little stressed.  Stress is also why I haven't written as much here.  As I thought about how I have been stressed last night after reading this verse, these words resonated in my soul...

God doesn't call us to be stressed but rather stretched to rely on His strength.

There is tension placed on a rubber band when stretched.  The strength of what is holding the band keeps it from moving.  The little rubber band is unaware of what is happening at first.  It may hurt.  It may feel uncomfortable. However, as it is being stretched, it grows.  It changes.  It expands.  It takes on a new shape as it is drawn in close to its holder.  The band takes on a new shape for a useful purpose.  This new shape can only be cultivated by the strength of its holder.

A rubber band left in a drawer may be comfortable, but it isn't fulfilling a purpose.

I'm sure you can tell where I am going with this.

God is our Holder.  He is our strength.  When we feel stressed, we are actually being stretched for a purpose.  It feels uncomfortable, but we can be certain He is holding us.  And as long as we trust in the Holder, we won't be moved.