Keep and guard your heart with all vigilance and above all that you guard, for out of it flow the springs of life.  Proverbs 4:23

The Bible is clear about guarding our hearts.  As parents, it is our job to guard our children's heart until they are mature enough to make good decisions for themselves.  In today's culture, it is a full time job to protect the hearts of our children.

From video games to Victoria Secret, movies to T.V. commercials, and bullies to boyfriends, our job never ends.  I pray often for God to send godly influences into the lives our children and for Him to remove the people who would be bad influences on them.  He never fails to do both.

In 1 Kings Chapters 3 through 11, we can read about King Solomon.  He was the son of David and became king after King David passed away.  He was young when he became king and started off his reign asking the Lord for wisdom to rule the people.  The Lord was pleased with his request and not only gave him wisdom, but also great wealth and prosperity.

King Solomon was a good king and did many honorable acts as king.  He tirelessly worked to rebuilt the Lord's temple in Jerusalem, and built a mighty army and navy.  His renowned wisdom spread throughout all the world (I Kings 10:24), and the land of Jerusalem prospered under his reign.  It says in 1 Kings 10:24 that the king made silver as common in Jerusalem as stones.  Now that is prosperous!

However, Solomon did not guard his heart.  The Lord had warned him not marry women from nations who worshiped other gods saying,  "Surely they will turn away your hearts after their gods."   King Solomon had a weakness for women and did not listen to the Lord's warning.

For it was so, when Solomon was old, that his wives turned his heart after other gods. and his heart was not loyal to the Lord his God, as was the heart of his father David. 1 Kings 11:6

The same Solomon who rebuilt the Lord's temple and brought great prosperity to Jerusalem, would set the foundation for generations of Israelites to turn away from the Lord.  Not only did he not guard his own heart, but also failed to guard the hearts of his people.

He built alters to other gods, "high places", and burned incense to other gods.  He set an example and it didn't take long for his people to follow it.

What we allow into our hearts will overflow and affect our children.  Little hearts can easily be influenced, for good or bad.

There are times when I question how well I am protecting the hearts of my children:

Should I let them play Wii as often as they do?  Is it becoming a "high place" for them?

Is that T.V. program really appropriate?  Is is planting seeds of rebellion in their hearts?

I cringe when watching an innocent T.V. program and a commercial comes on that was not as innocent.  Did I just fail to guard their hearts?

Did they see that bulletin board as we were driving?  Lord, I hope not.  Protect their little eyes.

There have been times when we were watching a movie together as a family and we had to turn it off due to some inappropriate words or content.

It happened again recently.  The next day, our son, Luke, made this card. 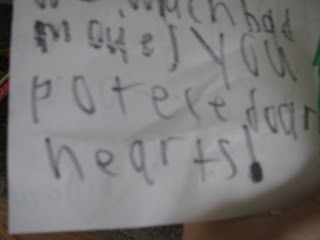 He wrote, "you been so important to me when we watch bad movies you 'poteced' our hearts!"

King Solomon did not "potected" the hearts of God's children that the Lord entrusted to him.  I don't want to make the same mistake.  However, it takes diligence.  I pray the Lord would help me to guard my heart and my children's hearts with all vigilance, that our hearts would always be turned towards him and Living Water would then flow out of us.

Dear Lord, please help me protect my heart and our children's hearts.  Show me if there is anything in our hearts that we place above you.  I pray that you would reveal and tear down those high places and give us wisdom to keep our hearts pure.  I pray for you to protect our children's ear gate and eye gate into their hearts.   I pray we would love you with all our heart, soul, and mind, and that love for you would flow out of us to others as springs of life.  In Jesus precious name, Amen.