Does Planned Parenthood Care No Matter What?

My heart pounded as we entered the door of Planned Parenthood.  Anxiousness hovered over me like a dark cloud on a dreary day.  I walked to the desk to sign in.  The lady behind the counter measured up my fear and quickly suggested a pill to ease my nerves.  She handed me the pill and water.  Within moments, lightness overtook the heaviness of dread.  I couldn’t feel.  Everything seemed funny.  Then my name was called…from that point on, nothing was funny.

A nurse escorted me down a long hallway and into a cold sterile room.  There was a metal table.  I knew immediately I wanted to leave, but it seemed too late.  Then pain.  Screams.  Wailing.  Uncontrollable tears.

Why didn’t anyone tell me? Why didn’t I know? Would it have mattered?  I’d like to hope so.
In April 2014, I went back to visit that Planned Parenthood for the first time in twenty-one years to pray healing over the land.  Karen Ellison, the founder of Deeper Still and some other Deeper Still team members and long time friend, Jill Balkema, walked around the building with me looking for a spot to pray.  The building had an aura of decay and death even evidenced by its outward appearance.  It was as if the death that happened on the inside of the building couldn’t help but seep through and spread to the outer as a wound bleeding inside rises to the surface as a discolored and eye-sore bruise. 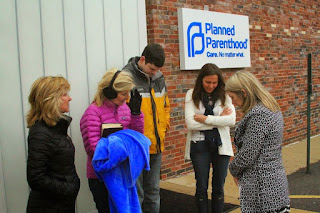 With the door in sight, my only thought was, “I wish I would have never opened that door. “ Then, as we prayed, the sign by the door was brought to my attention.  “Care. No matter what.”

I wonder?  Do they really care no matter what?  What about the lives lost daily?  What of the women left wounded who come into their doors?  What about those standing outside crying because of a choice made years ago?  If I had told them my story and how an abortion nearly destroyed me, would they had listened?  If they read this post, how would they respond?
Please don’t misunderstand.  I don’t blame them.  It was my choice.  My question is a rhetorical one.  The answer…an obvious one.

Planned Parenthood has been in the news much lately as the public has gained knowledge of their practices in harvesting and selling aborted fetal tissue.  Planned Parenthood received $528 million dollars last year of tax payer’s money or $1.4 million per day (Lifenews.com).  Congress is in the process of trying to bring a vote to the floor to have Planned Parenthood defunded by tax dollars. Let us continue to pray for the lies to stop and truth to surface.

Please join me in praying for truth to prevail and click on the link below to sign the petition for Planner Parenthood to be defunded.

Oh Heavenly Father, we come to you today on behalf of our nation.  The governments and rulers of our nation have created laws against You and against Your anointed.  Oh Lord, we as a people have allowed them and have bowed down to the idols of selfishness and self-reliance.  We have sacrificed our sons and daughters on the altars of self-interest.  Oh Father, we ask for you to hear our cry and forgive us and forgive our land.  We ask for You to speak and for truth to be unveiled and justice to come.  In Jesus’ Name, Amen.